The amount of stories is endless. I have preferred to talk to you a bit about the briganti while we crossed the mountains of Lucania. Because even though we are peaceful, we share their indignation against the state. And we have adopted their battle cry which we have sung whenever we found ourselves confronted by police or carabinieri… “Hey! Ho! Hahahaha!”

None of it all. But there is one thing that I still want to touch upon before we march further into Apulia. It’s about the basis of our current economy. Petroleum.

The region of Basilicata – the official name of Lucania – is one of the few territories in continental Europe, maybe the only one, where there’s oil to be found.

I’ve seen the installations here, on one of my previous travels. I’ve seen the chimneys burning away the natural gas 24 hours a day.

It has only been a few decades since the drilling began, but since then things around here have started to change. Real estate values have dropped, the environment has been polluted, and the local underworld which hadn’t previously been active here, started to become attracted by this new ‘market’.

There’s a strong movement in Basilicata active against the oil industry. People are angry, mainly because they feel colonised. Big oil takes away their resources, but hardly any of the profits return to the local population. Fuel prices here are as high as anywhere else. So yes, times have changed, but one way or another the south has remained a territory of exploitation.

On the Cathedral square in Altamura

We reach Altamura, the ‘city of bread’, and we take the central square.

Police arrive. They had been informed by their colleagues from Gravina for a change. They start off on the wrong tone.

‘You weren’t supposed to occupy this square. We had agreed you would put up your tents elsewhere.’

I know nothing of such an agreement, and neither do the people of the vanguard. I answer that we decide ourselves which square to occupy. In this case we put our tents right next to the cathedral.

“And who are you, the duke of Altamura?”

Not quite. I’m a modest person. But the officer doesn’t like me. On the phone with his commander he calls me sfacciato (insolent). At that point I change attitude. I have lived two years in Sicily, enough to take insults very personally.

When the commander and the rest of the local police force arrive, I make it clear that respect is the basis of a fruitful dialogue. “I will not talk to you,” I say to the officer in front of his superiors, “you have failed to show me respect.”

Honestly I don’t like to humiliate someone in public, and in this case it was mainly theatre, but it worked. Police were a lot more reasonable after that.

What followed was the same old story. They don’t want us to camp here. They want us to show documents. They forbid us to make a fire, etc.

The fire is lit under their noses. We refuse documents. They try to insist, they menace to use force. “We can still come to an agreement, but if our superiors in Bari give us the order, we will take you in.”

In the meantime a crowd has gathered around us. They like us. They talk to us. They bring us food and blankets.

“As you wish. But do tell your superiors that if they decide to use force against peaceful citizens, it will be broadcast live on the internet. It will go around all the social networks. The whole world will be able to watch it. So with all the bad publicity that would result from it, your superiors should think twice if it’s really worth the effort.”

It wasn’t, of course. Like many of their colleagues before them, the police very silently retreat, and leave the square to us.

March from The Netherlands to Brussels by bike & 15O (vidéo)

Yesterday’s demonstration concludes a chapter of the revolution, or maybe just the prologue. On the day after, many of us say goodbye. People go their own way. Some are returning to Spain, some are hanging around. I go up to Holland.

It has been an honour to march with these people, or most of them at least. It will be a pleasure to see them again, wherever, whenever. We are dedicated to the revolution, we are the first wave, we have a bond.

Almost five months ago I arrived in Sol, and I camped. “If this is going to be the defining moment of my generation, then I want to be there”.

Since then I have had the pleasure to witness and to document the acampada, the summer of the popular marches and the big demonstrations, the destruction of Sol. Finally the March on Brussels, the occupation of the university and World Revolution Day.

It has been an extraordinary experience. And now it’s time for me, and for many of us, to take a rest.

The first winter of the movement is at hand. Revolutionary HQ has been cleared and sealed by the police. The experiment of the free space has been too short to properly evaluate. In this week we were severely handicapped due to sanitary problems and lack of internet. The society might have seemed to be on the edge of collapse, but it could just as easily have selfregulated itself. I’m actually pretty optimistic about that. I’m convinced that we can fruitfully occupy covered spaces as a movement.

I also think these actions should have a clear goal, as opposed to the wild occupation of Revolutionary HQ. Spaces for living. Spaces for meeting. Spaces for study. Spaces for art. There are spaces enough. And together we can make them useful. All it takes is a little fantasy.

People are occupying squares in all the world. Also in Holland occupations are going on, in front of the Stock Exchange in Amsterdam and on the Malieveld in The Hague. We really did come a long way in the last five months. Even my brother, a notorious capitalist, wasn’t ashamed to walk along with the demonstration in Brussels. He doesn’t believe that something like a revolution is really possible. But he believes in evolution, in change for the better.

Now that it has started I plan to keep coveering it, but I do not know yet where and when. In the next few weeks I want to try to put my experiences, and the current expansion of the movement into perspective. Then I’ll see.

It concludes my chronicles of the march and the initial months of the 15M movement. I thank you, first of all my revolutionary brothers and sisters with whom I have had the pleasure to share this. And of course I thank you, my beloved readers. If it weren’t for all the heartwarming and inspiring comments I received I might never have been able to keep it up until the end. I thank you too for the sporadic negative reactions, because I’m convinced that if something doesn’t meet with opposition it can have little meaning. It’s the same reason why I don’t support the consensus model. If an idea is shared by absolutely everyone, it can hardly be a good idea.

I leave you with the image of our outsourced Media Center. People behind computers twenty-four hours a day. Empty bags of crisps on the table. A comrade of mine who wants to remain Anonymous, tells me how it all starts. The march, the occupations, the acampadas, the demonstrations, the whole damn thing. It starts right here.

“You know that the idea for a March on Brussels, has been circulating since February. We did that. We simply started bombing the social networks with messages about a march on Brussels. After that, people began to talk about it, it went around on Facebook, and in the end, a group of people started walking. I was overjoyed the day that the Mediterranean came by right beneath my window.”

I imagine things like Occupy Wall Street being organised in the same way. A couple of nerds behind a computerscreen on a sunday morning, eating donuts. “What shall we do today?”

“Heck, why not? #globalrevolution it is.” 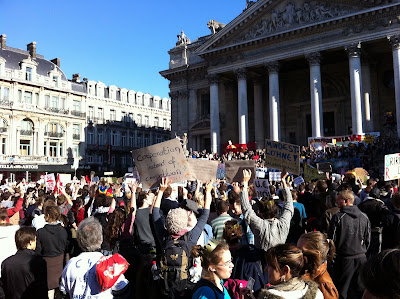 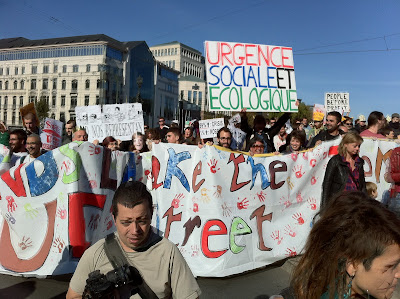 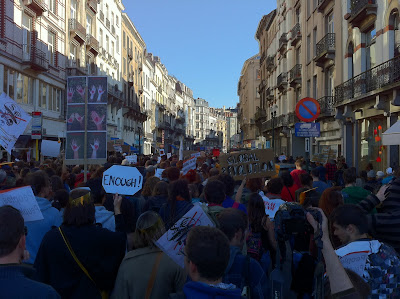 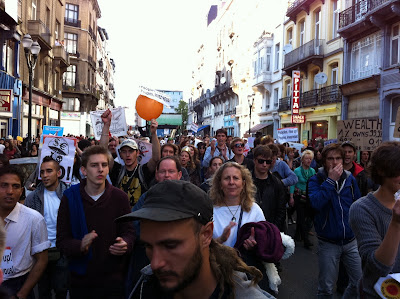 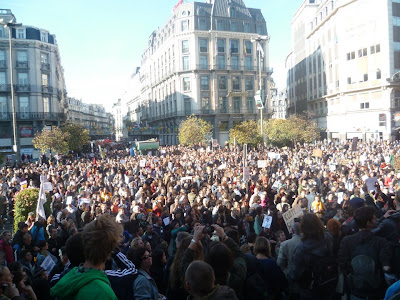 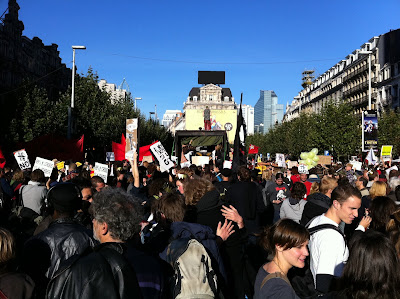 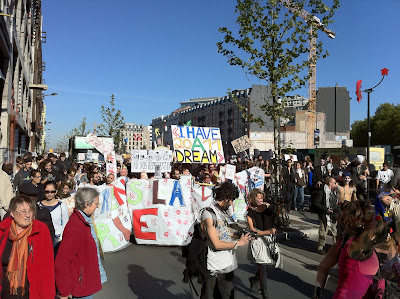