Yesterday some of us had themselves arrested for defending the public space. Today, the public space lay abbandoned, and no-one seems to care. No way we are going to camp, we have an entire building now!

The comrades who got arrested were dropped off at the Basilique this morning, next to police vehicles with horses and water cannons on standby. They didn’t receive anything to eat during the night, they were forced to suffer the cold without blankets. They were exhausted when they entered the building of the Flemish University this morning, and they found people occupying spaces in a state of infantile happiness.

For the first time, our movement has a roof. The evening before, we could only use the central hall and connected corridors, but this morning, keys were found, and one by one all the spaces of this enormous building were conquered.

It lay frozen in time in the year 2010, when the university moved elsewhere. The library looked like an Egyptian tomb that was recently raided by grave robbers. Only small piles of books and chronicles were left on the otherwise empty shelves of the b ookcases.

The building has a curious structure. And not everywhere the light was working, especially on the stairs. In this situation, exploring the five levels of the building, and the various levels hidden in between was like playing a Doom-style video game. You enter the dark in a hexangular space. The stairs are on the side. When you descend them, there are various directions to choose from. One of them leads to the light. It’s the underground level, the cafeteria, where the kitchen is installed. If you take another direction, you might find the entrance to the Aula Magna, which hosts our General Assembly, the first one with real seats.

In between the two there is an intermediate level with a small reunion room and two offices that overlook the Assembly hall from behind glass. There’s a table, a chair and electricity. For now, I have put up my camp there.

This evening I have been exploring the building. The class rooms and the offices on the third and fourth floors have been occupied by groups of people from the marches mainly. Some of us have claimed a private space, resulting in the consequent animosity.

On the higher floors, the first commissions and working groups have claimed their spaces. The Media Center is on the fifth floor. Their major problem for the moment is to set up a stable broadband internet connection. We have another Media Center completely operational elsewhere in Brussels. The video upload works from there.

Up to eightteen commissions have popped up for the moment, but their whereabouts and have not yet been clearly defined. One of the few commissions that has already been well-installed is the Mycology commission. They treat mushrooms. Their goal is to gather and index them on the basis of their hallucinogenic potential and organise ‘psycho activation’ classes. Fortunately, we have someone with relevant knowledge on mushrooms. “Any shroom that grows from shit is hallucinogenous, and it’s strong!”

Another adventure has started. Out of primordial chaos the first faint glimmers of order are taking shape. During the first day we have suffered already an inundation of the kitchen and foreclosure of the bathrooms. For now we have been able to feed the approximately three hundred persons present. But it’s highly likely that this situation will attract people from outside the movement. It will be interesting to see how we can deal with this and all the relevant social and revolutionary issues.

As for the General Assembly tonight, the first one indoor, it was a full blown trilingual disaster. When I left, we hadn’t yet reached an agreement on the day’s agenda. So for now, the only thing that moves our organisation is personal initiative.

Having a space, of this size, all for us, is almost too much to grasp. Many people are already decided to occupy this building indefinitely. With winter coming, it would be ideal to have our own physical space. But some of us are worried that it might be a shrewd move by the authorities. Conceding us this space, they probably hope we will not be too visible in public. Furthermore they might hope that our bunch of anarchist vagabonds will be unable to manage ourselves and that our society will soon collase.

It’s not impossible. We will have to see in the coming days what we will be able to get of the ground. Today was a day of excitement, a day of exploring our new playground and dreaming about all the possibilities.

On the Fifth Floor there has been installed the office of the Communication commission of Sol, without internet. I pop in and I meet some of the comrades that I met during the first few weeks of the acampada in Madrid. Reminiscing about the early days I look around. “Imagine. It all started with party tents and canvases under the equestrian statue of a public square. And look at us now. We have our own embassy of Puerta del Sol, in  our own Revolutionary Headquarters in Brussels.”

march arriving to Brussels from amira bochenska on Vimeo. 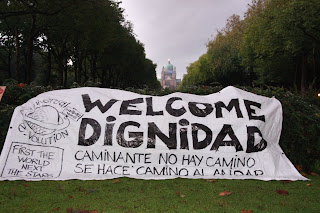 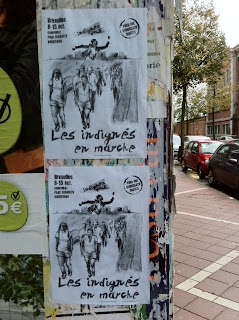 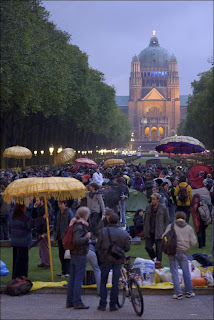 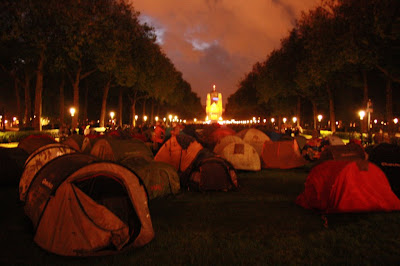 march arriving to Brussels from amira bochenska on Vimeo. 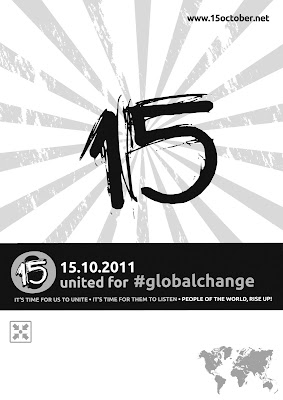 8 October after over 2 months walking marches from Spain and France finely get to Brussels. Organising hundreds of assemblies along a way and collecting propositions and messages for ' libro de los pueblos' they are ready now to start activities in Brussels. First day was a bit chaotic but from now seems like everyone is focus on work.

A suburb of the Acampada in Aalst

Dark skies hovered low over Aalst when we got ready to leave for the last leg of our trip. The great day had come. Many new faces had joined us to walk, all the way, in the rain.

Route Commission had planned three reunification stops, to make sure we would enter Brussels as a group. On all those occasions, right from the start, we were carefully observed by three police officers. The day before, comrade Canario had gone to Brussels to see how the coordination of our arrival was coming along. This morning I asked him for his evaluation.

Route of the last day

For some reason, I’m not surprised. And as the walk starts, the Central Committee reunites to consider the various possibilities. Unfortunately, none of the indignados from Brussels accompanies us with up to date information on the situation we will encounter. A detailed map of the city only arrives at the second reunification stop. At that moment, we hear that we do not have permission to camp anywhere and that our primary camping site near the Basilique is crawling with police. Repression like we experienced in Paris is in the air. We start plotting about alternatives.

Close to Brussels the rain stops and we receive the news that the police is retreating from the park. We can go there, after all, for our grand arrival.

Thus, late in the afternoon of August 8, we enter the capital territory of Brussels. A band of indignado drummers is there to greet us, and to accompany our entrance with a beat. Hearing that sound, seeing us march by with banners saying things like ‘bonheur pour tous’, the people in the windows watch us joyfully. Some of them respond to our salute with a V-for-victory sign.

In one of the smaller parks we reunite once again with the Mediterranean. Our group is numerous as never before when we march the last few metres to the Elizabeth park near the Basilique. The press will be there at seven.

At the park, a discrete group is people is waiting for us together with the Brussels indignados. They submerge us with cheers and a heartfelt applause. It’s great. But after walking thirty kilometres in the rain, I would have preferred it if they had welcomed us with warm drinks and something to eat.

At nightfall, we camp. The tents are deployed for the eye of the cameras, and the people lay out peaces of cardboard on the wet grass ifor a popular assembly in the dark. A lady from the municipal police intervenes to congratulate us with our accomplishment as a march. She says that the police does not have any intention to cause us trouble. She hopes that we will be able to work together in a constructive way, and she comes with a proposal. In short, we will be able to use the Elizabeth park every day for assemblies, working groups and other events. In case of bad weather these activities can be hosted at the Flemish University of Brussels, located at two minutes walking. It offers all basic facilities and we will be able to sleep there the entire week. But we will not be allowed to camp in the park. If we try to do so, police will evict us.

The rest of the assembly is dedicated to deciding if we will accept the proposal, or if we will try to camp anyway. The evening turns into a farce.

Many of us are hungry and cold. They don’t care to have an assembly about anything here. But as usual, it takes hours. Most people from the marches have gone elsewhere, so we start to wonder who is actually deciding in assembly about what we are going to do.

The only rational decision to take is to accept, without even calling an assembly. Then go to the university, and have one hell of a party. But apparently there is a small group of indignados who want to camp at all cost, to claim the public space.

I sigh. Once again we are giving a dire image of our movement. At a certain point, the police lose their patience, and van after van full of officers in riot gear are unloaded. They block the assembly on three sides. They give us ten minutes to accept the offer to go to the university or be arrested.

The reaction of people was just as predictable as it was stupid. Many of them sat together, bracing arms, ready to be taken away.

It made me think of the ‘dos de mayo’, the day in 1808 when Spain rose up after Napoleon had forced the Spanish king to abdicate in favour of the emperor’s older brother. The Spanish people didn’t rebel because they were attached to their king. He was a complete idiot, and everybody knew that. But when they saw the way their monarch was treated, they rose up because Napoleon had trampled on their national pride. ‘He may be an imbecile, but he is our imbecile.’

Something similar happened yesterday. People probably knew that it was absurd to hold a lengthy assembly in the dark about whether to stay there and be evicted or not. But when the police came to pressure them they rebelled. ‘This might be idiocy, but at least respect our assembly an let us finish this idiocy in peace.’

Some people from our march joined with the hardcore protesters out of solidarity. I didn’t. I’m not against a confrontation with police, as long as we have a space of manoeuvre. But here we sat with our backs against the wall.

We will be able to organise actions all week. The public space is ours, in any case. We don’t have to camp in the mud to prove it. I respect the conviction of the people who remained, but conviction without common sense is counterproductive, and potentially very dangerous.

They were taken away, more or less peacefully. There were too many police officers around, and it was too dark to be able to film anything.

I was there with friends of mine who had come to visit from Holland. “So this is Brussels, at last,” I said when the police bus drove away. “Let’s go grab a beer.”