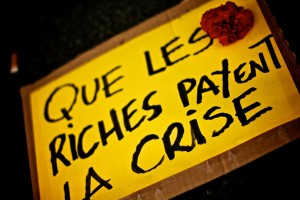 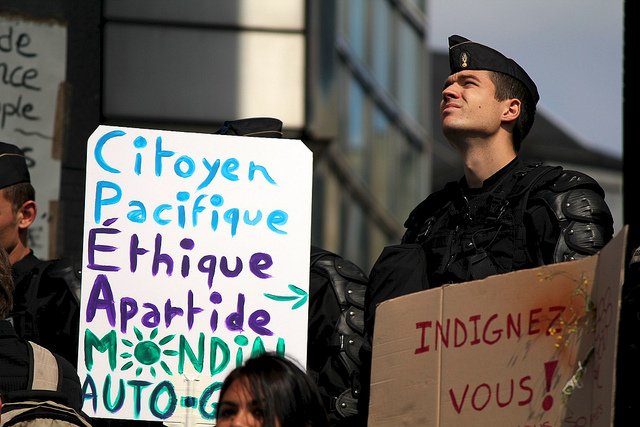 On October 15 almost every major city in the world was the scene of protests against the global financial system. I have been trying to put an image together of how the movement has been developing in these first few weeks that followed.

I started by making a comparison between the first wave of occupations, this spring, and the current one.

One has led to the other, both were inspired by the Arab spring, and fuelled by the financial crisis and the way politics has dealt with it. Both protests have a global resonance, but with different centres of gravity. The spring wave was more of a Latino-Mediterranean thing, centred on Spain and in particular Madrid. The autumn wave came from Wall Street, it enjoyed much wider media coverage and was picked up mainly but not exclusively by the English speaking world. At this moment, sustained occupations are going on in New Zealand, Australia, the UK, Canada, and most of all the United States of America.

I will give you some brief flashes from around the world. I will follow the sun.

On Global Revolution Day a crowd of police and journalists accompanied dozens of demonstrators to the financial district in Tokyo. The turnout might not have been very high in a city of about twenty million inhabitants, but it was significant because protesting is not a common thing in Japanese culture. Many of the protesters’ grievances were directed at the use of nuclear power, in the wake of the Fukushima disaster.

Low key demonstrations were also reported in Seoul and Manila. Occupy Jakarta has been going on since October 19.

In New Zealand and Australia there are occupations in every major city. From Wellington, Auckland and Christchurch to Sydney, Melbourne, Brisbane and Perth. The Melbourne occupation was evicted over a week ago. I wonder if it had anything to do with the [visit] of the queen to the city a couple of days later. Occupy Melbourne has now been re-established on a different site.

Occupy Singapore failed. Hong Kong is supposedly the only place in China where actions took place on October 15. And in much of India and South East Asia the occupation initiatives don’t seem to go any further than the Facebook pages. On the other hand, the India Against Corruption movement is gaining strength on the subcontinent since last spring.

I will leave the situation in the Middle East and North Africa out of the equation. For abundance of dramatic content it has already been extensively covered by mainstream media. What has been receiving less attention is the fact that massive demonstrations for social justice have been going on in Israel for months.

In South Africa, there are small occupy movements in Cape Town, and in the financial heart of the continent, Johannesburg. A few days ago a demonstration was held there, staged by the youth league of the governing ANC. It called for radical redistribution of wealth, and of white farmland among blacks. The racial dimension in the protest against the one percent is probably unavoidable in a country like South Africa. On the social media voices hosted the suspicion that youth leader Julius Malema wants to turn the country in another Zimbabwe.

In Europe there is a clear distinction between the southern countries that have already lived through a wave of occupations this spring and currently have more pressing matters to attend to, and the northern countries, where camping has only just become fashionable.

The occupation of Brussels withered away after a few days. But surprisingly, the movement rooted just north of the border, in the Netherlands. Amsterdam has been a flourishing camp ever since the start, and to date dozens of Dutch cities and villages are being occupied, or about to be occupied. Even my little home town of Dordrecht. I’m deeply touched.

There are people camping in Germany and the UK, there are rumours of people camping at La Défense in Paris. On the 15th the peaceful gathering in front of the Reichstag in Berlin was charged by the police. Protesters have returned to the spot since then, but the most prominent German occupation has been in Frankfurt, home of the ECB. On various occasions, Occupy Frankfurt has staged demonstrations in front of the bank, numbering in the thousands.

In London, the camp has been installed outside of St. Paul’s Cathedral. Due do the overwhelming presence of all the tents the church closed its doors for the first time since WW2. The dean has resigned in protest against a possible forced eviction. By now the church has reopened her doors. She was losing the revenue generated by the tourists.

To add to the religious dimension, the occupiers received an official note of support by various rabbis, who affirmed that the demand for a more just world was perfectly compliant with their faith. They signed under the name of ‘Occupy Judaism’.

There has been a little scandal as well, in London, when press used heat sensitive equipment at night to prove that 90 % of the tents were empty. Protesters countered the claim, by demonstrating that heat sensitive equipment doesn’t register all the presences. However it be, they admitted that not all the occupiers could resist the comfort of their own warm houses.

In the South of Europe, the revolution is at a different stage. I met comrade Ariadne in Brussels. She had just left Greece. She said that September had probably been the worst month in half a century. And she knows, she’s a historian. What is happening to the country is a national trauma. “Syntagma is dead”, I heard her say. It’s the great season of general strikes now, not of a peaceful assemblary movement, and it probably will not be for quite a while. “You cannot build a movement on a trauma.”

In Italy, strangely, the movement hasn’t really caught on, while there is every reason in the world that it should. This spring there has been some activity centred around the traditionally ‘red’ city of Bologna, but an Italian friend of mine described the history of the movement in Italy as the transition of ‘Take the square to take a beer’. In fall, the assemblies centered around Rome. It was the only place in the world where there have been serious disturbances on October 15. The people who shattered windows and burned cars or engaged in any other act of violence are, by definition, not a part of this movement. And I wouldn’t be surprised if they were infiltrators. The Italian prime minister or the right wing mayor of Rome wouldn’t have any ethical problems with resorting to this tactic.

In Nice, many veterans of the marches are gathering in occasion of the G20 meeting. Afterwards a sustainable march will depart. It’s destination is Greece, through Italy.

In Spain the assembly attendances have been down a bit in the last couple of months, but on October 15 the movement showed that it is very much alive and growing, and that Spain is still the epicenter of this revolution. Reports have come in of more than ten thousand people protesting in the tiniest villages of Asturias, more than in Brussels. In Madrid there were half a million people, in Barcelona 400.000.

The country is bracing for general elections on November 20, when the socialists will be voted out of office to be replaced by the dark side of the same medal, the Popular Party. Up until now, the movement in Spain has had relatively little trouble with authorities. All that can change when the PP comes to power.

In Latin America occupations are reported in Rio de Janeiro and São Paulo. There are revolutionary cells all over the continent. In Chile, the students movement for accessible public education has been active for months and is currently in a stalemate with the government.

In North America the movement has exploded on an unprecedented scale. Since the occupation of Wall Street began on September 17, the protest spread over every part of the U.S. and the inhabited zones of Canada.

In cities in the northeast like Boston, Montreal, and New York itself the campers are forcefully preparing for winter. Special winterisation working groups have been formed to coordinate this, first of all by getting the tents on pallets off the ground. Lists of needs have been drawn up urgently to meet with conditions after the first snow hit New York by surprise.

In Virginia, Occupy Richmond has been evicted by police in monday. The square has not yet been retaken.

Going West, all times zones are speckled with occupations. Detroit, Chicago, Minneapolis, Nashville, Kansas City, Denver, Calgary. The list goes on and on.

On the Pacific coast Occupy San Diego has been evicted last week, live on the internet. The site has since then been reoccupied by a multitude of citizens. From San Diego up north, the coast has been occupied up to Alaska. Los Angeles, San Francisco, San Jose, Berkeley, Seattle, Vancouver. In most cities there don’t seem to have been many troubles with authorities yet. Except for Oakland. The camp has been violently evicted this weekend. Projectiles were fired, tear gas was used. Protesters have reacted by throwing objects themselves. There were people injured. One of them is still in critical condition. He turned out to be an Iraq veteran. He came back from the war alive and he was hit in the head with a tear gas grenade for camping out in Oakland. The site has been firmly reoccupied.

The General Assembly of Occupy Oakland has called for a General Strike on wednesday November 2. Demonstrations of solidarity with Scott Olsen, the injured veteran, have been held all over the country and the world.

As the sun sets over the occupations of Honolulu and Maui in the Pacific Ocean, it has already risen again in Australia and the Far East. I imagine it must be a great place to camp for a better world, out there on the islands of Hawaii.