Occupy Movement Back at it with Launch of #WaveofAction
Ashley Curtin
NationofChange / News Report
Published: Friday 4 April 2014
The Worldwide Wave aims to bring global change-makers together to create a new paradigm to evolve society. 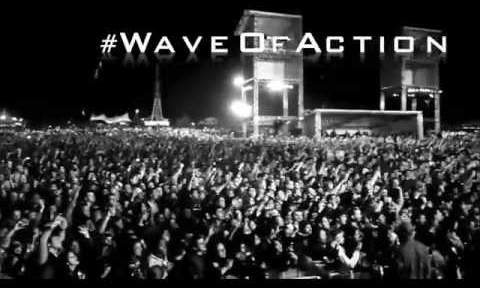 Former Occupy locations, which were once, home to thousands of protesters during the 2011 Occupy Movement, are again attracting people from all over the world as today kicks off a three-month campaign called #WaveofAction. The Worldwide Wave aims to bring global change-makers together to create a new paradigm to evolve society. From Zuccotti Park in New York City to Sydney, Australia, the Worldwide Wave runs through July 4.

What some are calling an “Occupy Movement reboot,” #WaveofAction—the official hashtag that will help track the campaign on social media platforms such as Facebook and Twitter—is a global campaign that gives people an opportunity to take action under a common theme and strategy. Throughout the world, protesters “will be engaged at the same time in an unprecedented wave of transformation,” according to the campaign’s official website, “protesting corruption, rallying around solutions and taking part in alternative systems.”

NationofChange fights back with one simple but powerful weapon: the truth. Can you donate $5 to help us?

The crowd-sourced campaign is determined to honor Dr. Martin Luther King’s legacy of nonviolent action by “connecting with allies and strategizing with like-minded people.”

“Studies show that it takes 3.5 percent of the population taking nonviolent action to create meaningful and positive change.”

#WaveofAction will officially begin at 7:05 pm EST, the exact time of MLK’s assassination, with candle-light vigils taking place around the world, according to Popular Resistance. But from there, the “decentralized” and “non-hierarchical” campaign will evolve organically.